This is going to be quite a time intensive post between the videos and article so am just giving a forewarning as not to think it will be a 5 min read on the way home or whatnot.

I had begun looking heavily into the build process of the BMW i3 over the past few weeks. I stumbled across the following videos, which go into an incredible level of detail from start to finish (If you’re really only interested in the CFRP process, than Parts 1 & 3 are of the most interest)

To the aerospace and automotive industries, high-rate production means different things. For airframers it is hundreds of aircraft a year; for automakers hundreds of cars a day. And those vastly different outputs drive divergent choices in structural materials and manufacturing processes 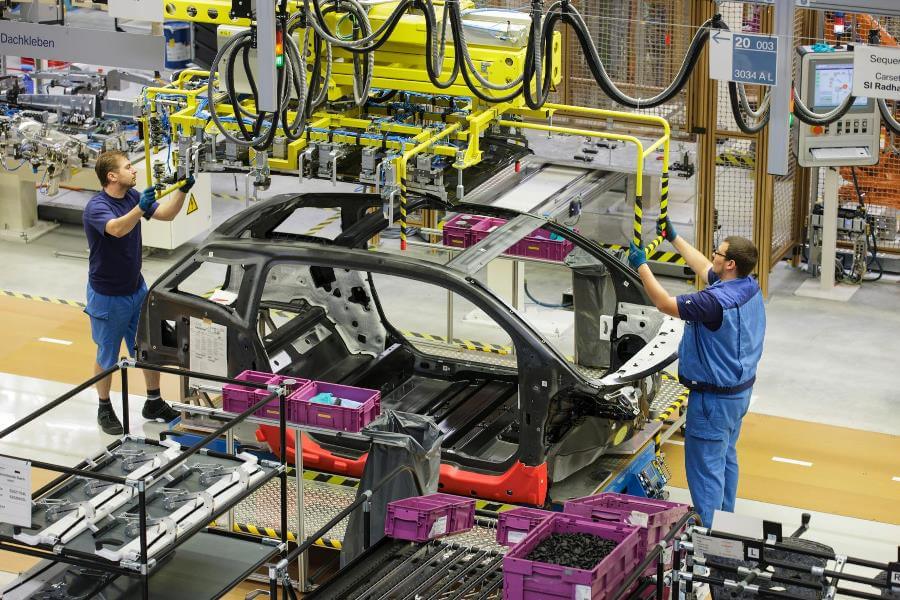 But, at first glance, it would appear the automotive and aerospace industries are drawing closer as carmakers strive to meet targets for reducing fuel consumption and emissions by switching to lightweight materials for vehicle bodies, including aviation’s staples: aluminum and carbon fiber.

Structural composites got their start in aerospace, but at the JEC Europe composites-industry show in Paris in March, there were many more displays related to cars, buses, trams and trains than aircraft. And as the automotive industry embraces composites, it is heading in new directions, driven by demand for low costs and high production rates. In high-volume carmaking, even 4 min. to make a part is too long.

“In the late 1990s, the only market for composites was in aerospace because of oil prices,” says Edward Bernardon, vice president of strategic automotive initiatives at Siemens PLM Software. Vistagy, which developed the Fibersim composites engineering software and was acquired by Siemens in 2011, “started a group in Germany to look at the high-volume automotive market and how to make carbon-fiber parts more cost-effective,” he says.

Initially, carbon fiber was used only in high-performance but low-volume supercars where material cost and manufacturing cycle times are less critical. Then in 2009, BMW announced it would build a small all-electric car using carbon-fiber composites. Deliveries of the i3 began late in 2013, but at 100 cars a day, it is at the lower end of the high-volume spectrum. Now automakers like PSA Peugeot Citroen are looking at composites, but for rates exceeding 900 cars a day.

According to Bernardon, automotive composites are unique because of the faster design cycles—“designs can change daily or weekly for packaging reasons,” he says. As a result, manufacturing processes developed by airframers and carmakers have diverged. “Resin transfer molding of preforms is a big percentage in automotive, but only a small percentage in aerospace,” he says.

But can the automotive industry’s push toward low-cost, high-rate composites benefit aerospace? Darpa thinks so, and the Pentagon advanced research agency plans a program— Aerospace Composites with Automotive Efficiencies—to significantly reduce the cost and time to make small composite parts—less than 15 lb. and 15 ft.—for use in aircraft.

Darpa believes materials and processes developed by the automotive industry could enable “build-rate insensitive, less capital-intensive” composites production for aerospace—with the critical caveat that parts must maintain the performance of the intermediate-modulus carbon-fiber/toughened-epoxy systems now used in aircraft. And that is an important stipulation, because low-cost composites used by carmakers will not meet aerospace strength, stiffness and damage tolerance requirements.

Darpa has requested information on short-fiber composites that have the same performance as continuous fibers but enable injection processes and forming over contours. Spraying chopped fibers onto a mold is one technique used by carmakers. But for aerospace use, unlike automotive, precise control of short-fiber orientation will be needed to provide the mechanical properties required.

The agency is also interested in rapid high-performance molding techniques to reduce cycle time, and conformable product forms that enable complex shapes and small parts that are now too expensive to use on aircraft. Darpa is looking for processes that allow multiple parts to be made on the same machine without drastic reconfiguration for each part. Other areas of interest include versatile automation to reduce touch labor with reasonable capital equipment costs.

An illustration of what might be possible if more composite parts can buy their way onto aircraft may be provided by Formula One, which represents an amalgam of aerospace and automotive engineering. Design teams make extensive use of small carbon-fiber parts to shave weight off their racecars. “Our F1 car is 80% constructed of advanced composite materials,” says Ian Goddard, research and development engineer with the Lotus team. “We use 34 different composite systems, 50 core variants and 10 structural adhesives. We make several thousand components and spend more than $2 million a year on pre-preg (material).”

Lotus faces the same design challenges as larger carmakers—aerodynamics, packaging, stiffness and crashworthiness—and uses Fibersim software for composites engineering, says Goddard. “F1 has an absolute obsession with weight” and, like aircraft manufacturers, designers must pay extra attention to fiber location and orientation. F1 is obsessed also with reducing time, he adds, as faster design and manufacture can put better components into the car 1-3 races earlier.

The state of the art in composites use in volume car manufacture is BMW’s Leipzig plant, where the i3 is produced as well as the i8 hybrid sports car. The i3 has an aluminum drive module that includes the batteries and motor, a passenger cell made from carbon fiber, a recycled carbon-fiber roof and unreinforced thermoplastic body panels. The structure is manufactured by resin transfer molding (RTM) of carbon-fiber fabric supplied by SGF Automotive Carbon Fibers.

Fabric stacks are preformed in a heated mold press then trimmed to near-net shape with an ultrasonic knife. Next, the multiple preforms making up each structural part are placed in a hydraulic press for high-pressure resin injection. Cured parts are trimmed by water jet, drilled and random samples inspected. Parts are then adhesively bonded together to assemble the passenger cell. Handling and bonding of the RTM parts is performed by robots.

Other parts are added robotically, including metal door hinges, the thermoplastic crash-protection system and carbon-fiber roll bar, then the passenger cell is attached to the drive module with adhesive and screws. Body panels are injection-molded from thermoplastic in an automated operation, with recycled material used for interior parts such as door liners.

All this should sound familiar to the aerospace industry, except perhaps the mix of materials and use of robots—and the speed, BMW talking in terms of minutes for part forming to a few hours for assembly. But as volumes increase, so do the differences. PSA Peugeot Citroen is looking at composites to reduce weight and emissions but needs processes that work within existing factories as it cannot afford to build new facilities to assemble such vehicles. “It’s a big challenge to introduce composite structural parts into mass production,” says Catherine Tual, innovation project manager.

As it develops the technology, the European carmaker is claiming a first—demonstrating the crashworthiness of a composite front floor module. This replaces the traditional steel underbody with a self-supporting thermosetting resin floor reinforced with chopped glass fiber. The module saves 8 kg in a mid-range car, which should increase to 12 kg with optimization, Tual says.

Parts count is reduced to four from 30, and welding of the steel floor is replaced by gluing and screwing. Cycle time for the full module is 2 min., she says, allowing the composite floor to fit within a production system turning out 550 cars a day at PSA’s biggest plants. “The technology is compatible with the systems used to assemble car bodies and can be used in a multi-material approach with steel,” says Tual. “We hope it will be in production soon.”

PSA began with crashworthiness testing because it is make or break for composites in cars, but it highlights a key difference between automotive and aerospace. Airframers can track the use of their aircraft through their lives, while carmakers have no idea how their vehicles will be treated after they leave the showroom. “After a crash, there will be cracks in the composite, and we need to understand what is critical. We do not yet understand how to measure the health of the structure,” she says.

The Cobra incorporates 500 lb. of printed parts made from 20% carbon fiber, which required 24 hr. of print time. BAAM was developed by ORNL, working with Lockheed Martin, which was interested in using the process to produce unmanned-aircraft wings. Recent improvements developed in partnership with machine builder Cincinnati Inc. include a smaller print-bead size for a smoother surface finish.

The first drivable 3-D-printed car, the Strati, was completed last September when Local Motors, working with Cincinnati and ORNL, built the vehicle over six days on the exhibition floor at the International Manufacturing Technology Show in Chicago. Additive manufacturing of the components using BAAM took 44 hr., followed by finish machining and assembly.

Local Motors, which specializes in crowd-sourced design of vehicles and operates a network of micro-factories to build them, says 3-D printing reduced the parts count to fewer than 50 from 25,000, and from design to drive took less than six months. ORNL says the speed of next-generation additive manufacturing offers new opportunities for automakers, particularly in prototyping.

It’s really exciting to see where the future will lie with composites as we hopefully find new ways to manufacture them at a rate and price point which makes them more applicable for wider purposes. I really have the feeling where at a stage that must have been like the first generation of metallic aircraft coming from wooden air-frames; it’s going to be quite the journey to see how the next 10 years or so pans out.