A simple three-step process Google uses to come up with its most innovative ideas.

I received this from a colleague which I thought was well worth the 5 minutes to read. I think for a lot of industries (mine included) you could replace “know the user” with “know the problem” - Originally it was from over here at Fast Company

Ill definitely be trying this out at our next DtC workshop…

Here at Google, we don’t have a secret formula for innovation. But that doesn’t mean Googlers’ best ideas are ineffable mysteries. On the contrary, we’ve found they can be systematically coaxed into being and steadily improved upon. And so can yours.

Just about everyone can learn to brainstorm better. After all, it’s a process like any other. And the beauty of a process is that it can be taught, learned, and shared. We’ve distilled our own approach into a set of three basic principles—ideas we believe can be adapted and applied at pretty much any organization, regardless of size or industry.

The way many of us brainstorm often gives the whole experience a bad rap: We typically envision a brainstorming session as an unstructured scene where wild ideas are thrown around in an ad hoc way—where anything goes. But at Google, while we’ve learned that freestyle brainstorming is the basis of innovation, it doesn’t turn into substantive action without some structure.

That’s why we’ve created a linear process for brainstorming new ideas and turning them into actual products:

If that looks simple, it is—but you have to execute each step the right way.

To solve a big question, you first have to focus on the user you’re solving it for—then everything else will follow. So we go out in the field and talk to people. We collect users’ stories, emotions, and ideas. We learn to get comfortable with silence. We watch, listen, and empathize. You can’t just understand your users’ needs—you need to actually relate to them.

For example, I recently visited our customers in Canada, Brazil, and India. By observing and talking with them, I realized that what we generically call “mobility” means very different things depending on where you are. In Canada, mobility means instant collaboration from your desk, the coffee shop, or your kitchen table. In Brazil, where users spend a lot of time in commute, a great interface and voice control underpin the concept of mobility. In India, where connectivity may be a challenge in some areas, a critical aspect of mobility is working offline.

Obviously, there’s no way we could’ve learned that without making the effort to find it out. And that’s something many brainstorming sessions get wrong right off the bat—they get everyone but the user into a room together to start throwing ideas around. But that’s actually Step 2, not Step 1.

Now that you’re armed with information to base your brainstorm around, you can get down to thinking—but not just any thinking. The notion of “10x thinking” is pretty familiar in the business world by now, and it’s at the heart of how we innovate at Google. It’s about trying to improve something by 10 times rather than by 10%. One example is Project Loon, our initiative for providing internet access to everyone: An incremental solution would be to just install more fibers, whereas a “10x” idea is Project Loon—a network of balloons traveling on the edge of space, designed to connect people in rural and remote areas and help fill the hardest-to-reach gaps in coverage. 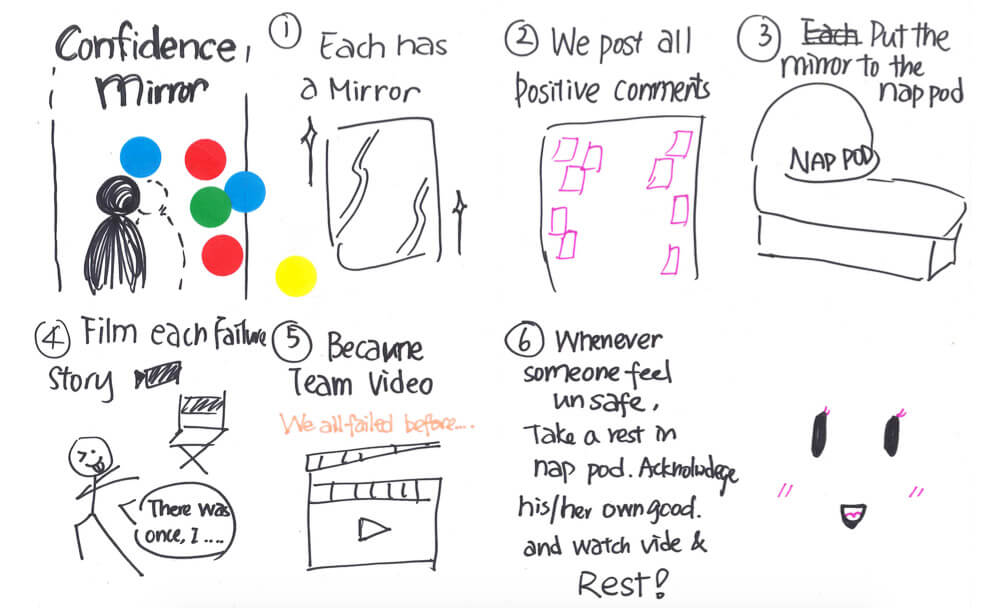 The next step is to have all participants write down their ideas individually before getting back together as a group and deciding which ones to pursue. Here’s the thing to understand before you do that, though: 10x thinking sounds great in theory, but not everyone quite knows how to put it into action. So when team members reconvene with their sticky notes and the most productive part of the brainstorming process kicks into gear, make sure to follow these six guidelines:

Then it’s time to take action. Most brainstorming sessions end with an agreement to have another meeting later, to take those ideas and work them up further. It’s a common mistake. You want to strike when the iron is hot—you don’t want to walk away or agree to follow talk with more talk.

Here at Google, we like to build a quick prototype pretty much right away. It doesn’t have to be perfect, just a physical manifestation of an idea that’s designed strictly to answer the most immediate questions and test our first assumptions about an idea that seems promising.

When it comes to details, we’ve found we can always fake it, so as much as possible, we like to actually make it. When you can hold your ideas in your hands, you can start to test and learn from them.