Its been a while now since we made the decision to shutdown our startup Weave and call it a day. I had lost the drive and the passion for the business when I saw that the end was near; and when it finally came I didn’t have the energy to even think about it.

The mourning has gone on long enough though, and now for the first time I can actually sit down and reflect on some of the causes and discuss it a little. This post will act as some self reflection and above all a chance to capture some lessons learned. Because as they say - experience is simply the name we give our mistakes.

Let’s start from the beginning - Weave was a web app where people shared truly special moments. Our thoughts were that the vast majority of content shared on social media is largely only “noise” - as there is no barrier to entry, most people flood their feeds with uneventful content. Originally after seeing love locks on a bridge here in Hamburg, It struck me that what’s enjoyable here is not necessarily the individual messages on each lock, but instead how all these special moments interacted together to create something bigger. It was with this in mind that the idea for Weave was born.

Users paid a small price to add a thread (post) to Weave. The idea was that firstly, this would address our business model, and secondly also ensure higher level content was posted while giving an element of value/exclusivity if someone posted something. “Threads” were a post which was colored based on its emotional quality and contained a small message / story, title, icon and uploaded image which allowed users to share meaningful moments and messages with the world. An algorithm was behind the interface detecting correlations from the meta data and connecting peoples threads that shared underlying similarities.

We wanted to bring the novelty of exploration to the end user, but with their story always at the center. People today search for content or drill down in folder like structures; Weave was designed to find underlying links and allow people to explore content via a graphical interface that is more organic than hierarchical (to the extent there was no search box!) We really wanted to reproduce that feeling of randomly walking in a new city and stumbling upon something you were never looking for. 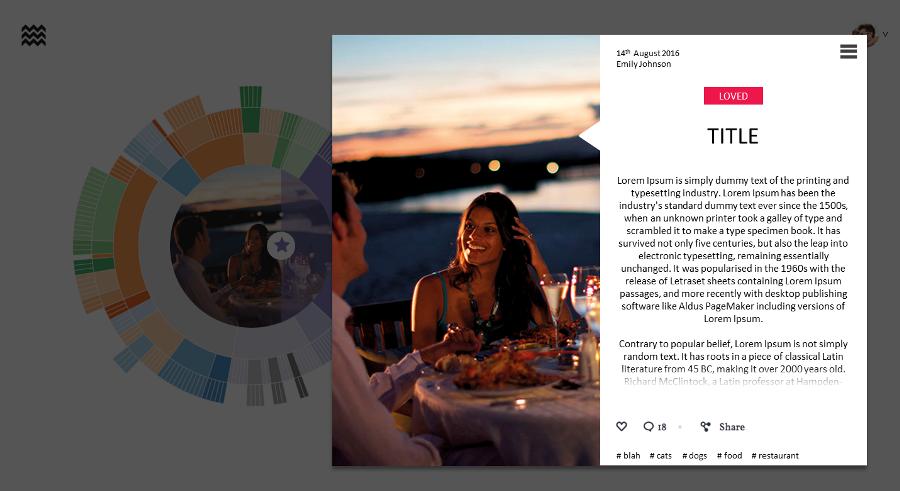 Our uniqueness was that we were the first to market with an interface that’s totally different to current platforms. This interface would serve as a strong novelty factor and by ensuring higher quality content people would enjoy exploring through in short bursts. By nature, the platform was designed for short term interaction/entertainment - perfectly suited to 15-25 year olds.

So with all that said - what went wrong? After looking through it, I think it was a combination of things. A lot of these may seem obvious, but when your passionate and deeply invested in something, sometimes you miss them or even choose to subconsciously ignore them. I would summarise them as follows:

Listen To The People That Pay

Hype made us think that we were doing well as a startup/concept, it made us feel like we were “on our way”. While the hype around Weave paled in comparison to what other startups experience in terms of PR and word-of-mouth, we were still deceived by the fact that almost everyone that heard the idea for the first time seemed to love it. But I quickly learned that hype doesn’t equal traction. It really doesn’t matter how excited a friend-of-a-friend got about Weave unless they became a paying customer. Only pay attention to people that invest a lot of time using your product or pay. Ignore the hype, it doesn’t mean you’re doing well.

We worked hard on the proof of technical part of the business, but we skimped on the idea validation/customer steps. When we started our business, we knew very little about how it would operate. So we turned to developing solutions as that’s what we knew and felt comfortable with (we are Engineers after all!) Instead we should’ve been out there interviewing more of those 15-25 year olds. Finding out why they were using Snapchat instead of Facebook and why they would (or wouldn’t) pay 99c for a thread. We made too many assumptions on our customers based on a limited set of information. Don’t start to brainstorm on the value prop of your product until you’re 100% sure that you’re building something that people actually want.

In an early product phase, try to reach product market fit first. Take short-cuts. Do things that don’t scale. Do things manually. Premature optimization locked in our resources that could have instead delivered more direct customer value. Looking back I would’ve much preferred a working business that didn’t scale yet, instead of a scalable business model/product that didn’t work. As the team was all largely engineers we had a natural tendency to do things “right” - we spent much MUCH too long on the backend ensuring stability instead of spending time with the customers and on their needs.

An oldy but a goody - Fail fast and fail cheap. While we were tempted to bring in additional developers to solve some more points, we ultimately decided that our time was too valuable to waste on a bad idea. The worst case scenario isn’t failing. The worst case scenario is to spend your prime years on something that isn’t working. If you must fail, fail fast and fail cheap. Don’t run a zombie company.

Finally, I will say that failure in general (particularly something as significant as having to wind down a startup) is really rough. Once you get through the sadness, anxiety, whatever it may be though, I can only recommend taking the time to sit down with a strong single malt and think: “What would I have done differently?” as its the answers to this question that will help you next time around.